Back at home for Thanksgiving

Gracie Hernandez, 58,  has her own personal struggle, and she will remember it the rest of her life.

Her house (no, her home) on the south side of Austwell, was destroyed by the storm,  and she struggled to bring her life and her family – her 20-year-old daughter, Divina, and her grandson, Ivan, 10 months old – back to some kind of normalcy.

With no options, she moved in with her brother in Tivoli. Then later to Victoria with her sister.

“Leaving was hard.  It’s not easy trying to live somewhere else,” she said.

For Hernandez, generations of her family lived in Austwell.

She had graduated from Austwell-Tivoli High School in 1979.

Hernandez in her determination to make her family comfortable, that is to have a place to call home, gathered up her money.

So she purchased a used FEMA trailer from a company for $23,000.

Alas, the structure did not comply with the city’s ordinances pertaining to trailers, manufactured homes and other structures.

So she was left in a quandary about what to do. Her struggle had just gotten worse.

But then in late February, about seven months after the hurricane and just when everything looked hopeless, the Coastal Bend Disaster Recovery Group contacted Hernandez, at the behest of city commissioner Molly Grace Garcia.

The CBDRG worked with the Episcopal Diocese of West Texas, Samaritan’s Purse, Dell Foundation, and the Rebuild Texas Fund to acquire a manufactured home to sit on the spot where Hernandez lost her dwelling on Aug. 25,  2017.

Hernandez, with their help, was able to give up the used FEMA house and transfer belongings to the new home.

“The challenge was to meet the (city of Austwell’s) standards,” said Christopher Brandt, CBDRG case manager.

A $9,000 concrete slab foundation was constructed for the new home, which was estimated to cost around $43,000.

On Nov. 20, two days before Thanksgiving, Hernandez was presented with the keys to her new home.

She said she was really happy to be back in Austwell, on her land and in a new home. 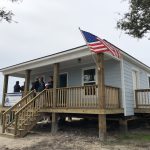 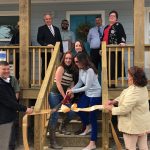