FULTON — As life-long Rockport-Fulton resident Jannet Bardwell made the 639-mile trip back to Fulton from Arkansas, where she stayed following Hurricane Harvey, she visualized her home.

It was the home she and her husband bought and placed on a lot in Fulton in 1982, and where her two teenager granddaughters have lived with her.

She envisioned her bedroom and living room and the pictures on the wall.

Each time she drove home, she had to remind herself there wasn’t a home to return to.

“It’s devastating to think I can’t go home, my home’s not there,” Bardwell said.

Hurricane Harvey in August ripped the front bedroom of her manufactured home from the rest of its structure. The roof caved in on another bedroom.

Her home was made whole again Friday as she received a new manufactured home provided by the Coastal Bend Disaster Recovery Group.

Her grandchildren will also be able to live with her once again and return to Rockport-Fulton Independent School District.

“It is the happiest day in a long, long time,” Bardwell said. “I’m elated. I know the girls are tickled pink. They are both excited to get into their new rooms.”

It is the second manufactured home to be provided by the organization, which is serving families displaced by the hurricane in Aransas, Bee, Kleberg, Nueces, Refugio and San Patricio counties. They are funded through private donations.

An additional 12 such homes have been funded and will be delivered throughout the summer, said executive director Warren Phipps Jr.

The organization has completed 30 other projects and is in the process of an additional 72 projects that include repairs of homes and 12 complete home rebuilds, Phipps said.

“This is a tremendous need,” he said. “Our organization is dedicated to helping the most vulnerable low-income families to recover from the hurricane. They’re the families that, despite all the government efforts and all that, seem to fall through the cracks and are unable to rebuild their homes.”

The Coastal Bend Food Bank filled the pantry of Bardwell’s home with food and provided a new refrigerator. 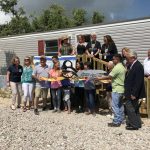 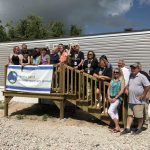