Refugio woman moves back into her rebuilt home

REFUGIO – Fridays always are great days to look forward to, but for Amelia Resendez, it was the day she was handed the keys to her new home on Swift Street, Aug. 10.

The 82-year-old, who doesn’t look older than 65, said Hurricane Harvey left her house at 1203 Swift St. in shambles a year ago.

“The west side of the house was blown away, she said.

“Most of my roof was gone. All the windows were crumbled,” she added.

Also, her refrigerator and other appliances were a mess.

But on this Friday, she saw her home completely rebuilt, thanks to the Coastal Bend Disaster Recovery Group.

The Rev. Beth Tatum, president of the CBDRG, said ground was broken on the rebuild in late May.

She recognized Christian Public Services as the builder.

And she recognized missionaries from New Jersey – the Taiwanese  Christian Fellowship – who helped move furniture and other items.

But most of all, she thanked Episcopal Diosese of West Texas, the Rio Texas Conference of the United Methodist Church and her own organization, the CBDRG.

And foremost, she thanked the family of  Howard Butt Jr. for their generous donation to the CBDRG, which made it possible to rebuild homes of hurricane victims.

Resendez’s rebuilt home was roughly $78,000. The money was all raised through private donations.

Also, the Coastal Bend Food Bank and CBDRG partnered to fill Resendez’s pantry with food  and cleaning supplies. The Salvation Army also contributed to those supplies

Others who contributed included volunteers from the Catholic Diocese in Massachusetts and Presbyterian groups from Connecticut and Round Rock.

Refugio County Judge Bobby Blaschke said he was sorry to see victims’ homes being built one at a time, but the rebuilds take time and lots of support.

“We’ll just chip away at it,” he said. “I’m grateful for these recovery efforts and hopeful for future projects,” Blaschke said.

“We recognize the challenges that lie ahead and know our work here is nowhere near being close to done,” said CBDRG executive director Warren Phipps.

“The completion of this project gives the volunteer group and its partners a sense of encouragement,” Phipps said.

“There are still a number of families out there hoping for the same end result. As we continue to utilize exisitng partnerships and form new ones, our collaborative efforts are able to reach more families and help them recover for years to come,” he said.

Resendez said it was suggested she stay in a nursing home while her home was being rebuilt.

“I didn’t want to stay in a nursing home,” she said.

So her son, Reyes Resendez, took her in his Refugio home while his mother’s home was being built.

CBDRG has committed to rebuild 27 homes,  including Resendez’s home. The value was estimated at about $2.1 million for home rebuilds.

CBDRG continues its  efforts to reach out to generous donors and foundations to raise the funds for more projects.

Two additional homes are projected to be rebuilt in Woodsboro.

Friday, as she was hugged by her case worker, she said she was happy to be back in her home sleeping in her own bed.

“Thank you all who helped,” she said.

“And thank you God.” 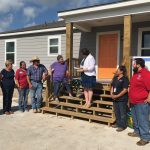