ROCKPORT, Texas — It took 21 months, but a family in Rockport, Texas, is finally back in their home since Hurricane Harvey made landfall.

“Right after Harvey, we lived with my in-laws for about five weeks, and then we moved into an RV. Also, we’ve been in that RV for 19 months,” Stefany Simmons said.

For Stefany and her family, it wasn’t what they wanted.

“Crowded. Stressful. We were grateful. Grateful to have a roof over our heads, but tight. About 200 square feet for four people. We have two kids, so a year, it was tight,” Simmons said.

A dedication ceremony and blessing was held at the Rockport home Tuesday.

The Simmons’ home was built higher, on nine-and-a-half foot piers after only having two feet when the house was hit with Harvey’s floodwaters.

With the help of Habitat for Humanity, the Mennonites, and the Coastal Bend Disaster Recovery Group, Stefany said their new home is far better than the old one.

“This is the 26th home that we’ve completed to date. We have 16 more under construction as I speak. Across the four counties of Aransas, San Patricio, Nueces, and Refugio County,” said Warren Phipps, executive director for Coastal Bend Disaster Recovery Group.

According to Phipps, they have raised around $7 million and have been able to provide more than constructed homes.

“We’ve also been able to deliver over 40 manufactured homes and a hundred a fifty repairs,” Phipps said.

“It’s been a long wait. It’s been worth the wait. Also, we’re just so thankful,” Simmons said. 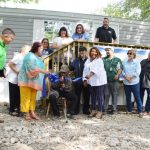 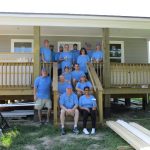