The first home dedication ceremony was jointly funded by the Mireles family, UMCOR, and Texas Blue Cross/Blue Shield Grant to CBDRG. Mennonite Disaster Service and CBDRG volunteers built the home. Coastal Bend Food Bank filled the pantry and refrigerator with perishable and non-perishable food items as part of welcoming the Mireles family back to their home. Anita Mireles, 53 and her brother, Mario Mireles, 46 have lived in Aransas Pass all their lives and love their hometown. Anita is Mario’s caretaker, as he is disabled. Mario is a well-known, respected minister in his community, according to his sister, Anita. After Hurricane Harvey made landfall, the family had to move out of their parents’ home they had been raised in and lived in all their lives.  While it was bittersweet to lose their beloved home, they are grateful for their new one. Anita and Mario expressed sincere gratitude to all who were involved in helping them restore their lives. As Anita and Mario received the keys to their newly rebuilt home, excitement filled the room while family and friends watched their loved ones cut the ribbon that signified new beginnings.

The Mauch family has lived in Aransas Pass for over 60 years. The home that was devastated by Hurricane Harvey was the home Ms. Pat Mauch grew up in, left to her by her father. Following the aftermath of the storm, the family was left homeless. After coming to the realization, they had nowhere to go, the family purchased a small storage unit, no more than 100 square feet, and a portable toilet in order to live on their property. The Mauch’s take care of their severely disabled sister who requires a machine plugged in every night. When a disaster case manager learned of their situation, they worked fast to get the family into temporary housing. The case was funded for a complete rebuild by CBDRG and UMCOR. After a few obstacles, the home is finally finished and the family is moving in.

“I want to thank God, Rio Texas, Rockport Baptist Church, and people I don’t know; I appreciate what you have done too,” said Pat Mauch. “Everyone that pitched in and volunteered did a wonderful job. Thank you so much.”

These two homes represent the 29th and 30th homes rebuilt by CBDRG and their partners since the hurricane.

CBDRG, in partnership with several other non-profits, have completed 151 major home reconstruction projects thus far and is continuing to work on another 54 on-going projects. All of this is possible thanks to the generous donors and hardworking volunteers. CBDRG continues to seek volunteers who range from skilled-laborers to general help. To learn more about the CBDRG and to fill open volunteer positions, visit www.coastalbenddrg.org/volunteer. 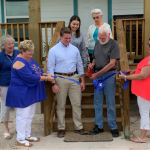 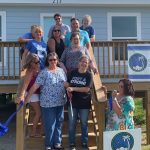