3rd time is charm for Flores’ return to Ingleside home

Refugia Flores came back home to Ingleside, she moved into the house she was raised in; the second time she came back, she was returning after evacuating for Hurricane Harvey; and the third time she came back, was to a newly-rebuilt home thanks to the Coastal Bend Disaster Recovery Group (CBDRG) and its partners.

The ribbon cutting and house blessing was held Friday, April 5, with representatives from CBDRG attending, as well as the Christian Public Services work crew. CBDRG president Beth Tatum who is also a pastor from First Methodist Church in Sinton blessed the house and said, “May all who enter here know the peace of Jesus Christ. He is our eternal dwelling place.”

Flores had been living in Corpus Christi, but life changes sent her back to Ingleside and she moved into the home her father had built with his own hands, tools, and plans. Her parents no longer lived there, having moved to a house next door. Flores worked as a home health aide and enjoyed living near family again.

Then Harvey struck the North Bay Area, and Flores and her parents evacuated.

The second time Flores came back to her Ingleside home, it was after evacuation and upon returning she found the house that had been her home for her entire life was “all wet.”

Flores said the rain “came in everywhere. The walls had collapsed. There was soggy drywall on the floors and furniture.”

Flores moved in with her parents, whose house had fared the storm a little better than hers had, even though it was right next door. She had help from the city to demolish her house after it was condemned.

Then Coastal Bend Disaster Recovery Group CBDRG) contacted Flores and told her she was “on the list.” The list was of houses to be repaired thanks to a donation from Shell Oil and the efforts of CBDRG, Christian Public Services, Mennonite Disaster Services, students from Texas A&M University-Corpus Christi, and RV Disaster Corps, and the Butler Family of Austin.

Flores was right next door at her parents’ home, and was able to watch the entire process, from demolition to rebuild. She stayed busy helping her elderly parents while she waited for the work to start on her house.

She said, “It seemed like a long time, but I knew other houses were being worked on. Then when Christian Public Services came to start working on the house, it happened fast.”

CPS is a Mennonite group helping communities recover from disaster. The work crew for Flores’s house was supervised by Jared Koehn of California. Flores said, “They all looked so young. I thought they wouldn’t be able to do the work. I was wrong. They are strong, and friendly, and responsible.”

The house was completed at the end of March. The refrigerator and pantry were filled by the Coastal Bend Food Group, and Samaritan’s Purse.

The only task left to do was a ribbon cutting and house blessing. At the ceremony, Flores gave thank you gifts to the CPS work crew, and thanked CBDRG, Shell Oil, and the food bank.

Accepting the keys for the new home was bittersweet for Flores for two reasons. Her mother passed away in November 2018, and did not get to see the finished home. Flores said she is blessed to have the home and place to live, but wishes her mom could have been there.

Second, although it’s not the house her father built, she said, “It’s a beautiful house. It feels like home.” 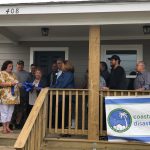 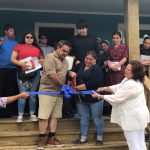