Through the combined efforts of the Coastal Bend Disaster Recovery Group (CBDRG), Mennonite Disaster Services – Storm Aide (MDS), and Samaritan’s Purse; Joe Cantu received a much better view from his front porch after receiving the keys to his brand new home Wednesday, Feb. 27 in Rockport.

He built his old home from the ground up. It started out small, but over time he added on to it and made it a pleasant home for him and his family. After Harvey hit, the home suffered catastrophic damage. However, Cantu refused to leave. He patched up what he could; the roof was covered in tarps, yet the house was still in dire need of major repairs.

In July 2018, CBDRG Executive Director Warren Phipps and Program Manager for NA Ministries Tony Krofchik were doing a ride along and surveying the neighborhood where Cantu lived. As Phipps and Krofchik were passing by Cantu’s home, they saw Cantu sitting on the front porch. They quickly realized that the state of the home was not good and pulled over to talk to Cantu. Upon seeing the dangerous condition that the home was in, Phipps expressed to Cantu that they were going to build him a brand new home. In disbelief, Cantu said nothing to Phipps.

“When we told him, I think it went over his head. I think he was still in shock. Not understanding what it all meant,” said Phipps.

Soon after, the CBDRG was able to get in contact with Cantu and after providing the necessary paperwork and reviewing his case, the CBDRG approved to build Cantu his new home.

Over the course of the next few months, Cantu’s old home was demolished and the MDS built an entirely brand new home.

Cantu did not convey much verbally, but his family members expressed that Cantu was eager for this day. They said Cantu woke up especially early in anticipation to finally be living on his own property in a brand new home.

Cantu’s home completes the 13th home rebuilt by CBDRG and its partners and is the 10th to be rebuilt in Rockport/Fulton. There are currently 24 rebuilds in process and five manufactured homes in the process of installation.

CBDRG, in partnership with several other non-profits, has completed 90 major home reconstruction projects thus far and is continuing to work on an additional 74 on-going projects. All of this is possible thanks to the generous donors and hardworking volunteers. CBDRG continues to seek volunteers who range from skilled-laborers to general help.

For more information about the CBDRG and to fill open volunteer positions, visit www.coastalbenddrg.org/volunteer. 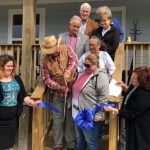