REFUGIO, Texas — He’s all smiles now, but life in the military could barely prepare Wayne Frazier for the weather that would strike on Friday, August 25, 2017.

Frazier was heading out the door of his Refugio home when a tree fell on his car.

He was stranded and Hurricane Harvey was headed right for him.

The small town of Refugio was one of the hardest places hit.

The Refugio Fire Department checked up on the veteran.

He called 911 the night before but they could not make it out then.

Frazier knew he could not stay, so he started a year and a half of bouncing around South Texas with no home.

First was George west, then he moved to Beeville until he moved into an apartment with his son for four months before his son had to move on.

Luck would find Frazier and keys to a new home this January.

The Coastal Bend Disaster Recovery Group and Rebuild Texas Fund along with two church groups, helped restore faith building him and his wife a new home.

Copyright All Rights Reserved © 2018
Volunteering with the RV Disaster CorpsMedia 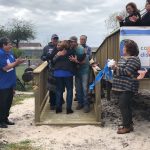