The start of another hurricane season is just weeks away, but the long-term recovery from Hurricane Harvey continues. One organization heavily involved in that effort is the Coastal Bend Disaster Recovery Group.

Since the storm in August 2017, the non-profit has taken on hundreds of projects and helped dozens of families who lost their homes. That includes Juan Carlos and Elizabeth Leal, whose home in Rockport suffered severe damage. The Leals saw the destruction up close when they came back from the Valley after Harvey’s landfall.

“My first impression is, ‘I want to move. I can’t take it. It’s too much,’” Elizabeth Leal recalled. “Yet my daughter that lives next door heard me say those words and she went, ‘Hey mama. What happened to being strong? Didn’t you teach us to be strong? So let’s start from the beginning.”

But their road to recovery got off to a rocky start after a home visit from a FEMA representative.

Then months later, the family received an unexpected phone call that changed everything. It was from the Coastal Bend Disaster Recovery Group.

CBDRG executive director Warren Phipps said the Leals were among 84,000 families on a list the group received from FEMA who had made claims in the Coastal Bend in Harvey’s aftermath. He said the phone calls got the ball rolling for disaster case managers to determine what the needs are. Phipps said the group often fills the gaps that insurance and the government cannot because of private donations.

Corbin Seidel is the CBDRG disaster case manager that assisted the Leals. Speaking of his experience with the family, he told KRIS 6 News, “they are warm and welcoming, as they still are. We gave them a house, but they made it a home.”

The group also benefits from the skilled labor of several volunteer organizations, including the Mennonite Disaster Service. Those members worked on the Leal home.

“Amazing things happen in Rockport with these people from Ohio, Pennsylvania, New York, Nebraska, Kentucky, ” Juan Leal said about the work of the Mennonites and other volunteers.

By July, the recovery group will have 42 rebuilds and more than 150 home repairs since Hurricane Harvey. But with many in Rockport and other Coastal Bend towns still needing help, their work will continue.

“You can drive around this town and still see tarps covering roofs,” Seidel said. “I just hope that we can get as many of those folks helped before the gong strikes.”

Phipps said that CBDRG is already working on another project with the Mennonite Disaster Service that will help between 12 to 15 families. That work will start in the fall and continue through next spring.

Meantime, the Coastal Bend Disaster Recovery Group relies on volunteers and donations and is always in need of both. If you’d like to help, you can visit their website at www.coastalbenddrg.org. 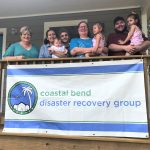